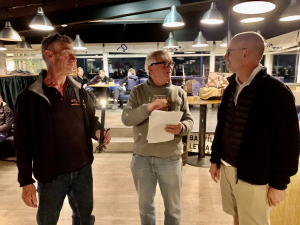 My first race on Braassemermeer - SWE 101

I contacted the OK sailors in the Netherlands to find a place to sail and practice. I normally sail on the ocean in the southern part of Sweden, but I needed to find a club and sailors to practice with also in the Netherlands. Rob Ligtenberg reached out to me and suggested that I sail with him on a. At first, I had anticipated having to drive some distance to get to a good spot but being only 25 min away from home was a definite benefit. Rob convinced me to join him and from March I have had my OK dinghy on the pier at WV Braassemermeer.

I have been met with very nice and helpful people on land and on the water. The facilities are exceptional and have everything that you can possibly need to practice and sail throughout the full year. In addition, the clubhouse is overlooking the beautiful lake and offers good food and drinks at reasonable prices.

In the evening on 3 May I set out to join my first race on Braassemermeer. It was the DiZeBra weekday race that Rob had talked so much about. As the racing started at 19:30 I must admit that I was a bit worried that the wind would die and that it would be dark before we got back to the dock! After a quick dinner in the club house, I made my way out to the course area when the starting line was being laid. I needed to the hang of the wind and the conditions and followed a Finn sailor who I later got to know as Gerard Post. We made a few runs and I had soon figured out the approach I wanted to pursue.

The keel boats were first in the starting sequence, and I realized too late that their start signal was the dinghy fleet 5 min signal. I did manage to time the 4 min signal and when the race started, I was off to a good start very close to Claar and not far away from Marleen in their Solos. I went for right-hand side of the course where I was in the contention with Gerard in his Finn and on the downwind, I was battling with Victor in his ILCA 7. I finished the first race behind the Finn and ahead of the ILCA dinghies which was satisfying. The second race was a repeat of the first race as far as conditions and favoured end of the line while the pressure dropped some during the race. I again started close to the starting boat and wanted to go right but got caught in a bit of traffic and lost some pressure. Gerard managed to slip away, and I spend the rest of the race needing to find clean lanes and possibilities to sail my own race. I stayed calm getting into the box at the rounding’s and did pick up a position or two. It was a good first racing evening on the Braassemermeer! Good tight racing and camaraderie on the lake with close rounding’s and cheerful chats.

We were back at the dock before it was dark and still some wind! I was helped with getting the boat back on the pier by Claar. The after-race discussions accompanied us as we made our way from the boats to the changing room and a warm shower. The good stories continued in the bar with the after-race drinks. To my big surprise I was presented with the price for the daily winner with a series of a 1st and a 4th. Wining also came with some obligations and a nice surprise as I was presented with the “Braassemermeer candle”.